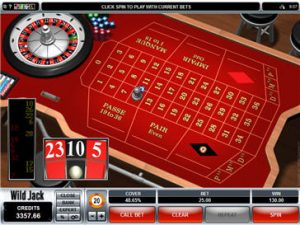 The Wild Jack Casino offers six different variations of the classic roulette game that can be played for real money and also in practice form once a player has joined the online casino. Joining the online casino is quick and simple and may be done through the downloaded version or the play online version of the casino.

As a new member to the Wild Jack Casino the player receives many benefits including up to $1600 in match up bonus offers that are given to the new player over his first four deposits. The match up bonus offers may be used for the roulette online games and any of the other games offered at the casino.

The Origins of Online Roulette

European online roulette is one of the most popular versions of this classic casino game that was devised in the 17th Century by a French scientist called Blaise Pascal. Pascal was intrigued by perpetual motion and as a result created a game where a ball was projected into a wheel spinning around rather quickly and he spent hours working out the probabilities where the ball would come to land.

Over the years the game of roulette developed and moved from continent to continent.  The European online roulette game is played on a wheel that is made up of 37 numbered and colored pockets. These pockets are marked with numbers from 1 to 36 divided between red and black colors and  there is one green pocket that hosts a zero. The American roulette online game has an extra pocket with a double zero.

In the modern game of roulette online players are invited to place a bet or number of bets on a special betting grid that is separated into bets on the outisde of the grid and inside bets. The outside bets are those where you place your bet on large groups of some of the numbers with something in common, that may be the first dozen numbers, all red numbers, and all even numbers and so on.

The inside bets that generally offer higher odds are bets on single numbers; two numbers grouped together, three numbers in a row or four numbers with all number blocks touching. Players can place both outside and inside bets when playing roulette, this is encouraged as it gives the player more opportunities to win.

Once the player has decided on his game, his betting size and the numbers or groups of numbers that he wants to bet on, the player is ready to click on the button and set the wheel spinning. Where the ball comes to rest will determine the winning number and the online roulette game is able to calculate the winnings immediately.